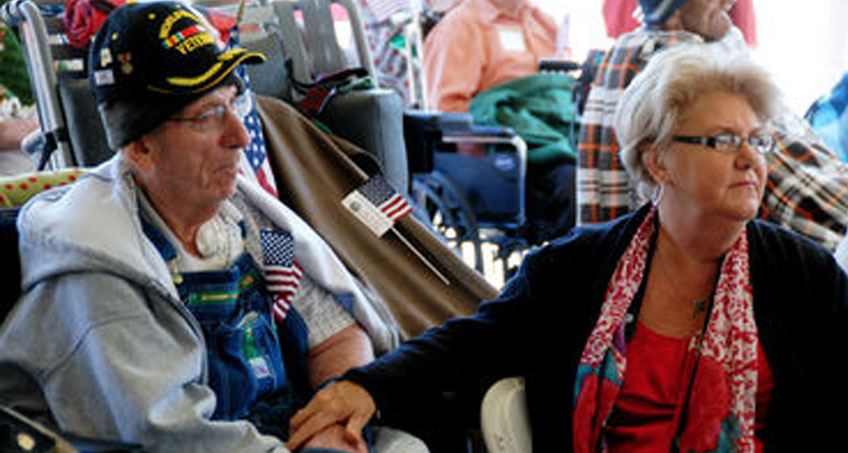 BAY MINETTE, Alabama — A small American flag lay on each of the dozens of chairs set up under the front portico in preparation of the annual William F. Green Veterans Home Veterans Day Program held this morning in Bay Minette.

Sewn to the plastic stick supporting the tiny flag was a simple phrase, “I am grateful for your service and sacrifice to freedom and our county.”

Beneath the phase on the tiny flag sitting in my seat was a neatly written signature in black ink – “Fern Frishman.”

Under that, in a space designated for Ms. Frishman’s hometown and state, she had simply scrawled “Illinois” in her neat cursive handwriting.

The call to honor the nation’s veterans as Fern Frishman from Illinois had done was part of her participation in the Non Commissioned Officers Association’s National Defense Foundation program that each year distributes the flags to Bay Minette and other cities and towns across the country.

Began as a program honoring veterans living at the William F. Green facility, whose numbers now stand at 150 from all five branches of the military and including three women, the annual program has grown to attract veterans of foreign wars from across the region.

While speeches by retired Army Col. David Reaney, who is the executive director of the Bay Area Food Bank and retired Rear Admiral W. Clyde Marsh, the current Alabama Department of Veterans Affairs commissioner, in their own way paid homage to veterans of all wars, the most poignant moments occurred in between.

It is often easy to forget that Veterans Day is meant to honor the sacrifices of the living as well as the dead.

That was brought home as members of the Baldwin County High School JRROTC laid a wreath in memory of veterans who died in battle or across the passage of time.

Members of the Honor Fire Detail from the P.L. Wilson Detachment of the Marine Corps League fired several volleys and Alabama Rep. Randy Davis, who is an associate professor of music at the University of Mobile, played a stirring rendition of taps.

As Davis’ trumpet sounded the mournful honorarium, the meaning of each note was obvious on the veterans’ faces — many of them and a number of the other hundred or so in attendance lowered their eyes.

All of the veterans on hand were given pins designating the country’s thanks for their service and certificates denoting its appreciation.

While the pins and papers were being distributed, the fight songs from each branch of the military were played. Before the music began, military attendees were encouraged to stand as their branch’s song was played.

Some stood more easily than others and many of the older veterans could not stand at all, their advanced age confining them to wheelchairs.

Still, those who could did stand and with a dignified countenance rock-solid with the obvious pride in their service to the nation shining bright in their eyes.

It was not hard to spot more than a few tears leaking slowly from the eyes of veterans and their families as the music played.

During his closing address, William F. Green Veterans Home Executive Director Brian McFeely thanked everyone for helping to make the program a success.

He then turned his attention to the veterans, reiterating the nation’s well-deserved thanks and appreciation of and for their service as exemplified through Veterans Day.

At the end of his remarks, he said simply, “You are my heroes.”

It could not have been said any better.