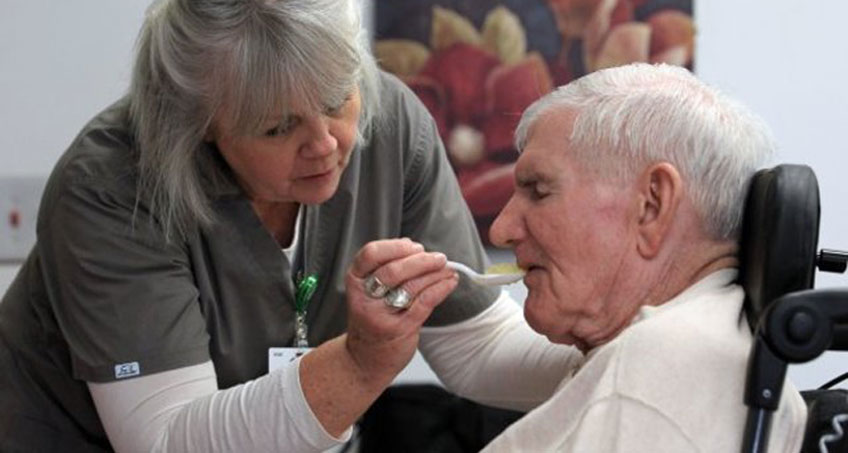 The Heart of a Nurse

George Crumley once wore a uniform, and was part of an effort to defend his country on foreign soil.

Because of his service and her heart, Donna Blackston stopped as soon as she saw him walk to the door of the nurses’ station. Immediately, her attention was directed to him. He was the main person in the room. She asked him to dance with her or maybe sing.

“Oh, how he can dance,” Blackston said, holding on to Crumley.

Crumley had a different idea, though. He did not come for a dance. He came for a hug and a cup of ice cream.

After sitting him in a chair, Blackston obliged his request. She asked one of the nurses, Lacey Saylors, to heat it up for seven seconds in a microwave so it would be soft enough for him to scoop out with a plastic spoon.

As he waited for his ice cream, he looked up at Blackston. A slight frown came over his face.

“You love me?” he asked her. “I do love you,” Blackston said, leaning in to give him a hug.

Crumley served in the U.S. Army Air Corps from 1945 until 1948. He is a veteran of the Korean War. And he has earned medals and ribbons for his service.

These days, though, the uniform is gone.

He is one of 44 veterans that Blackston, a licensed practical nurse, takes care of in Unit 605 of the Richard M. Campbell Veterans Nursing Home. This is the floor where the veterans who suffer from advanced dementia live.

Blackston has cared for veterans in this unit for 20 years.

This year, she was named the South Carolina Health Care Association’s Nurse of the Year.

“Donna is the backbone of Unit 605 and is an absolute joy to work with,” the nursing home’s administrator, Greg Osborne, said.

Osborne was the one who nominated Blackston for the award. She won for the nursing home and then garnered the top award for nursing facilities all across South Carolina.

With her usual joking tone, Blackston, 63, laughs a little when she talks about the award.

“Mr. Osborne came in and shut the door,” Blackston said. “And I thought, this is it. I thought I was getting fired. Then he started talking about this award. I just looked at him. I couldn’t absorb it.”

To Blackston, this is just what she does.

She has been a nurse since she was a kid growing up in Cleveland, Ohio. She said she would treat and care for her dolls and any of her friends in her neighborhood.

She had a toy doctor’s kit and a plastic stethoscope in those days.

“In those days, your parents would send you outside and tell you not to come in until the streetlights came on,” Blackston said.

The inclination to be a nurse or work in the medical profession was not something she inherited or picked up on from her parents. But it stuck, from her childhood all the way through to high school.

She volunteered at the hospital in her community when she was old enough. And when she was 18 years old, and a high school graduate, she worked at a dry cleaner’s to pay for her tuition to the Parma School of Practical Nursing.

Blackston graduated from the nursing program in 1969 and has been a nurse ever since.

She has cared for elderly neighbors, raised six children and has 16 grandchildren. That was at home.

At work, she cared for the patients at St. John’s Hospital in Cleveland before she moved south to Anderson County 35 years ago. She worked at AnMed Health, Medicus and another local nursing home before she came to Richard M. Campbell Nursing Home in 1993.

And here, she found her home — a second family.

To her and the staff on this unit, the men and women here could be their grandparents or parents. Blackston’s father, Martin O’Boyle, fought in World War II. He was a bomb detonator and served in France and Germany. He received a Purple Heart for his service.

Here, in this unit, Blackston said she has met men who helped build the twin towers of the World Trade Center, learned stories of miraculous survival from veterans who were at Pearl Harbor when it was attacked, and has heard many a story from the battlefields of World War II.

“I love veterans,” Blackston said. “That’s why I am here. They all have a story. You have to understand these guys. They have done so much. They served us, so it is an honor for me to be able to serve them.”