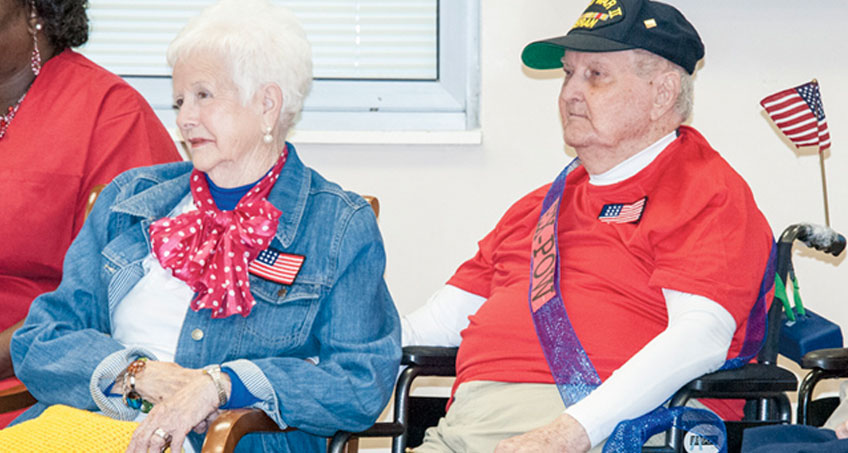 All across the area, residents took time Tuesday to honor those who served our nation on Veterans Day.

In Alexander City, Bill Nichols State Veterans Home held a special ceremony for its residents. At Brown Nursing Home the Veterans who live there were treated to a flag ceremony that included the Alexander City Veterans Honor Guard. In Goodwater, about 40 people gathered Tuesday morning to say thank you to their “heroes.”

At Bill Nichols, the ceremony began as the Alexander City Honor Guard posted the colors and conducted the parade of service flags.

Patti Smith gave a great rendition of the National Anthem. She later led the crowd in the singing of “America the Beautiful.”

Alexander City City Councilman Tony Goss said being at Bill Nichols makes him imagine the feats accomplished by the the Veterans in the crowd.

“When I am here, I take a step back and turn my imagination on,” Goss said. “I take a look around the room and visualize the things that you all saw and did. I see the helicopter pilots who flew combat missions and helped save our wounded. I see you all fighting in the trenches for our freedom.

“I can’t thank you enough for all that you have done for our country.”

Ms, Alabama Nursing Home Edna Farrell served in the Army Cadet Corps and recalled helping soldiers and outlined how her family had served.

“The Army was a big part of my life and it still is today,” Farrell said. “I can’t imagine what it would have been like without all those brave soldiers who fought for us all.”

Mayor Charles Shaw said he was honored to be in the presence of so many people who served their country so bravely.

“It is a great honor to be here to thank you for your service and for what all of you have done for this city, this state and our country,” Shaw said.

“I’d like to say thank you to every veteran here,” Woodham said. “You all served for freedom and that freedom, still rings strong today.”